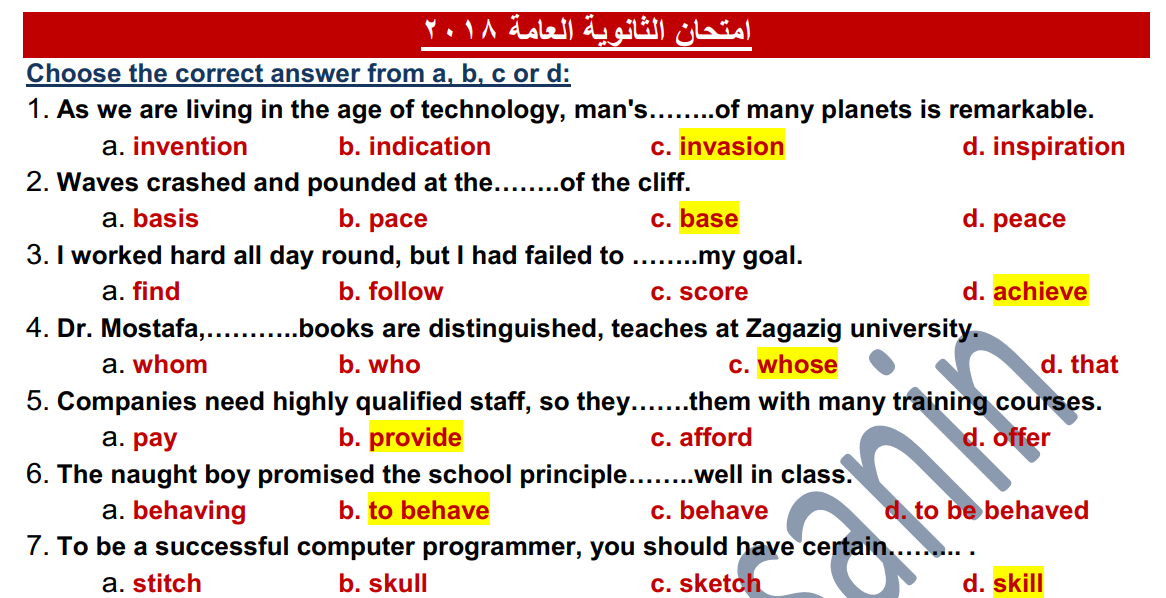 Choose the correct answer from a, b, c or d:

Find the mistake in SIX ONLY of the following, then correct them

Respond to each of the following situations:

I don’t like that idea. I’d prefer to go to the cinema.

Be careful or you’ll fall off the ladder.

I don’t agree with you.

What does the word “phenomenon” mean?

Because she might recognize him and tell people that he wasn’t the real king.

He didn’t let Michael in saying that he forgot the rules.

He realized that he would be in trouble if Michael’s plans succeeded as he knew much about them. He hated Michael.

” So no one can do anything! It’s a stalemate!”

Fritz to Rassendyll and Sapt

Because the two teams (Rassendyll’s and Michael’s) couldn’t say anything in public without admitting their deeds.

In the King’s palace in Strelsau

B: I’ll examine you and see.

Read the following passage, then answer the questions:

Garbage does not disappear when you toss it in a can. The average American throws away an estimated 1600 pounds of waste each year. Where does all that trash go? There are four methods to managing waste: recycling, landfilling, composting and incinerating. Recycling is turning waste into new materials. It can reduce pollution and energy consumption. Yet, some argue that it uses more  energy than it saves. Landfilling is burying garbage in a hole. Garbage is  compacted before it is thrown in the hole. So, more garbage can fit in each landfill, but it may pollute the water supply. Composting is when people pile up organic matter, producing compost which can be added to the soil. Yet, it is hard if  inorganic materials are mixed up with organic materials. Incinerating is burning the garbage. The heat produced can be used to generate power, but it pollutes the air. To conclude, the community where you live manages waste. The choice is yours.

The heat produced can be used to generate power.

So that more garbage can fit in the landfill.

1600 pounds of waste each year

Read the following passage, then answer the questions:

Philbrook and Michele Gran were married in 1979. Instead of taking a honeymoon cruise to the Caribbean, they decided to spend a week in a rural village in Guatemala, where they helped raise money for irrigation project. When they returned to their home, the local newspaper wrote a story about their unusual honeymoon. Soon, people started contacting them, asking how they could plan a similar trip, Philbrook said, “We knew there was a need in rural communities around the world, and now we were learning people wanted to do this.”

In  1984, the couple founded Global Volunteers, a nonprofit agency for people  of all ages, who want to spend their vacations helping others. Now, this  organization sends about 2000 volunteers each year to community development programs in twenty countries. These projects are focused on helping children and their families. Volunteers work side by side with local people.

Instead of taking a honeymoon cruise to the Caribbean, they decided to spend a week in a rural village in Guatemala, where they helped raise money for irrigation project.

Because they help people in rural communities.

Throughout history, our Arab scientists have fascinated the world with their amazing contributions and discoveries. They  have  enriched  scientific  research. So, we should take pride in them and follow the footsteps.

B- Translate TWO only of the following sentences into English:

1- We should implant love of work and loyalty (belonging-affiliation-pertinence) in our children and encourage them to be creative.

2- It’s necessary to take precautions to face/confront the risks of unexpected rain.

B) Achievement you are proud of